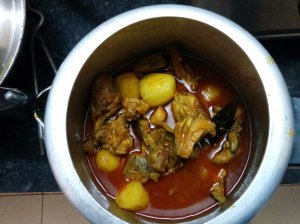 Here comes the recipe for Golando Steamer Chicken Curry. It was a dish which my grandmother (Nani Ma) cooked for me. I loved having it on the cold wintery afternoons in my childhood. Apart from this, Chicken putpaat with spicy garlic chutney used to be my favorite on those balmy wintry afternoons. Having been bought up in Deoghar, Jharkhand, which has such a strong Bengali influence such dishes formed a regular part of our diet.

History goes that this Chicken curry was served in the steamers ferrying passengers from Golando Ghat, (now in Bangladesh) to the main lands of north eastern India. Story goes that the curry was pretty runny and was served with dal and steamed rice. A normal serving was two pieces of chicken in each bowl, but you could bribe the maharaj majhi to get a few more pieces on the sly. In any case then for the caste Hindus, the whole dish was generally eaten on the sly for chicken was generally considered a Muslim dish and the non-vegetarian among the caste Hindus ate either mutton or fish.

My friends helped me with the history of this dish and I am really grateful to them. Suvojoy Sengupta tells me that Golando was apparently the last railhead and that a trip from Kolkata (Calcutta) to Dhaka was first done by rail from Kolkata (Howrah must be) to Golando and then on steamer from Golando Ghat to Dhaka. Aditi Mukherji tells me that the place now remains famous for its watermelons. I really hope to taste them some day. It also came as a pleasant surprise when Shraman Jha informed me that Golando Steamer Curry remains on the menu of old Bengali cuisine restaurants like Bhojohori Manna. It is some tragedy I missed visiting the restaurant when I was based in Kolkata.

The dish is very basic and pretty simple to make. While researching the menu (out of curiosity), I found that some chefs recommended adding shrimp powder in the chicken, but I don’t remember Nani Ma adding it. Guess it was pre e-commerce days, and there was no way she could get such a powder in Deoghar.

So here is the recipe. Bon-appetite!

Potatoes: 4 (peel and cut into 8 pieces)

Mix the marinated mix in the chicken and leave it for 1-2 hours. Heat oil in a wok, add bay leaves, the cardamoms and the cinnamon sticks. When it becomes to slightly splutter, add the marinated chicken and cook first in high and then in low flame till all water dries up and oil separates. Add potatoes and keep stirring for some more time. Now add water for the curry and let it cook. Add cumin powder and black pepper powder and cook for some time more time till gravy attains some thickness.